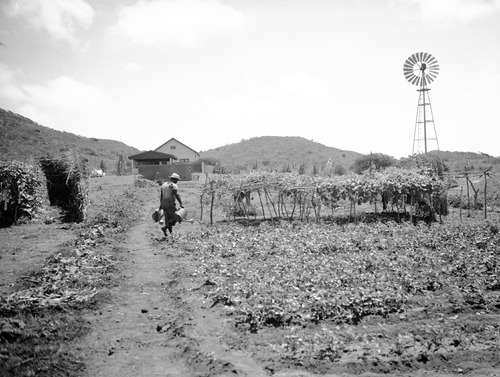 The last and only Sint Eustatius farmer told Dutch Newspaper Trouw in februari 2019 that he could supply the whole Island with fresh vegetables if he could store rainwater underground. Interestingly Sint Eustatius used to store a lot of it’s rainwater in cisterns. Unfortunately this knowledge and heritage has been largely forgotten. So it is high time to shed some light on the subject.

Rainfall varies greatly in the islands of the (former) Dutch Caribbean. Due to the tropical Monsoon on the ‘bovenwindse eilanden’ rainwater cisterns or ‘waterkelders’, ‘waterbakken’ and ‘regenbakken’ or ‘regenputten’ can be found scattered around the islands of Sint Maarten, Saba and Sint Eustatius. Aruba, Bonaire and Curacao (ABC islands) are semi arid with dry spells but may experience heavy rainfall during hurricane seasons, on these islands to a lesser degree smaller ‘regenbakken’ can be found.

The ABC islands used to be covered with dry tropical forests. Human activities from the first Amerindian settlers point to a slash and burn agriculture on a small scale. They used groundwater wells and potholes or waterkuilen to harvest rainwater. Some of these wells have been in use until this day but little is known about this subject and more research needs to be done to understand the pre-colonial water supply system. An invaluable inventory has been made by an inhabitant of Curacao, Mary van Soest, of these so called ‘waterkuilen’, ‘karstputten’ and plantation wells.

Less rainfall due to deforestation

Deforestation on a huge scale in the ABC islands started with the export of brasilwood first by the Spaning and subsequently by the Dutch (from the 17th century) to Europe (for its red textile dye). Introduction of cattle to roam freely prevented the  green cover from recovering. Also mangrove forests along the coast were cleared. The last wave of large scale land clearing took place in the 20th century to make way for sisal and aloe vera cultivation. The loss of green cover led to soil erosion and a different hydrological cycle and decreased rainfall. The erratic dry and wet spells are expected to become more frequent and extreme in the region due to climate change. The Rijksdienst voor Cultureel Erfgoed (RCE) made an inventory of its shared heritage in the Dutch Caribbean in 1995. From this inventory it seems most relics of rainwater cisterns can be found on Sint Eustatius. The cisterns to store rainwater were built on plantation complexes, near the ports, military forts along the coast, churches and public and governmental buildings. Interestingly, the cisternes are not always built below the main building, as we are accustomed to in the Netherlands, but slightly elevated above ground level. They have more in common with Mediterranean cisterns than with the Dutch waterkelders. As the islands were first colonised by Spain this could be an explanation, but more research needs to be done on that part. Fresh water was a valuable commodity on the islands.  So called ‘water plantages’ on Curaçao harvested rainwater and putwater. Selling water to urban residents, business, governing and military bodies and cargo ships.

To summarise the findings of my first exploration of drinking water en rainwater harvesting related heritage on the small island states of the Dutch Caribbean: Dwelling built in 1872 with regenbak to harvest rainwater from roofs for domestic use in Bonaire 1995 (photographer: Saskia de Kock | source: RCE)